Use a cell phone? Want it in the phone book? Submit it here >

Outdoors In The Land O' Lakes

We recently had an inquiry from a reader in the Georgian Bay area, who while searching for information on Poisonous Hemlocks, found a column that was published in the News five years ago. He was extremely concerned because he had found plants on his waterfront property that appear to be Spotted Water Hemlocks.

Since these weeds can be very toxic, we are running the updated column again. To learn more about these dangerous weeds, there are some great websites you can check out including www.invadingspecies.com

There are two species of highly poisonous Hemlock weeds that grow throughout Ontario: Spotted Water Hemlock (Cicuta maculata) and Poison Hemlock (Conium maculatum). Both are members of the Carrot family, as is Wild Parsnip, and all look similar to Queen Anne’s Lace, at first glance. To add to the confusion, there is also the non-toxic Common Cow Parsnip and Common Water Parsnip, which look very similar to their very dangerous, poisonous relatives.

When this column was first written, I noticed a couple of plants near our dock that were very similar to Queen Anne’s Lace except that the overall flower cluster was not flat but instead was shaped like a convex group of little umbrellas (see photo). The leaves were long and narrow (about 3-10 cm). These plants may have been the Common Water Parsnip but I never did find out for sure. That fall, once we were well covered with long pants, jackets, gloves and boots, we removed the plants and burned them. They didn’t appear again, to our great relief.

Spotted Water Hemlock is considered to be our most toxic wild plant. It is native to most of North America from northern Canada to southern Mexico. Its tuberous white roots are often mistaken for parsnips. It’s shocking to think but, according to my research, a single root stock can kill a horse! Children have been poisoned by using pea shooters made from Water Hemlock stems. Though a few people have died from Water Hemlock poisoning, livestock have fared much worse. Symptoms such as nausea, vomiting and convulsions can begin quickly, within 30-60 minutes, followed by severe cramps. Both Spotted Water Hemlock and Water Parsnip have similar clusters of small white flowers shaped like little umbrellas and both like the same habitat near the shore line of lakes and rivers. Water Parsnip, however, is not poisonous but it so closely resembles the poisonous varieties that it’s not worth taking a chance. 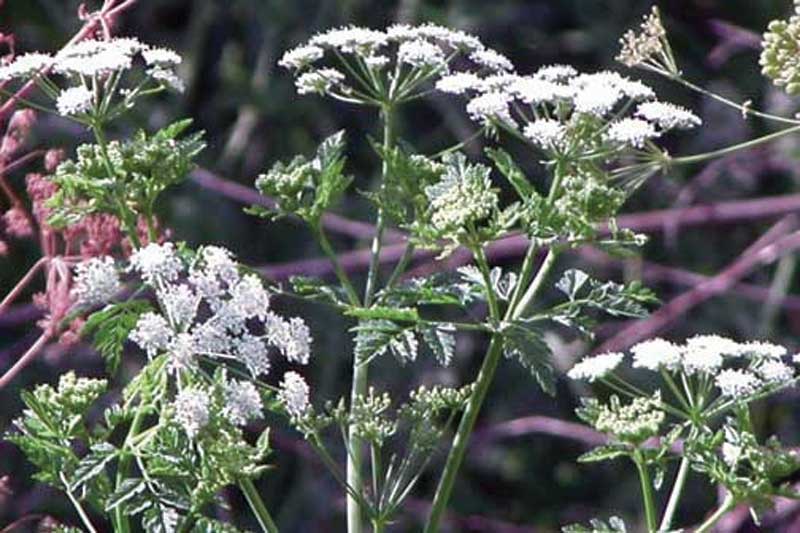 Poison Hemlock (Conium Maculatum) is native to Europe and the Mediterranean region. This weed was spread into Ontario in the early 1980s in a seed lot of alfalfa. It’s often found on poorly drained soils, particularly near streams, ditches and other surface water. It also appears on roadsides, edges of cultivated fields and waste areas. This weed looks very similar to the other nasty members of the Carrot family. At first glance, the flowers also look like Queen Anne’s Lace, except the small, white flowers are clustered in little umbrella shapes rather than flat. It is a biennial plant that can grow up to 8 feet (2.5 meters) tall with long, hollow stems. The stems are smooth, green and usually spotted or streaked with red or purple on the lower half. The leaves appear to be lacy and fern-like. It produces a large number of seeds that allow the plant to form very thick stands, sometimes encroaching on cultivated fields, and to the extent that it stops the spread of any other type of vegetation inside its area of growth.

All Poison Hemlock parts are poisonous; however the seeds contain the greatest concentration of poison. Once the plant is dead, the poison is greatly reduced, although not gone completely. This plant contains a number of poisonous toxins, the worst of which is Coniine, a neurotoxin that has a chemical structure similar to nicotine. It disrupts the workings of the central nervous system and is toxic to humans and all classes of livestock. Coniine causes death by blocking the neuromuscular junction – this results in muscular paralysis with eventual paralysis of the respiratory muscles leading to death due to lack of oxygen to the heart and brain. Death can be prevented by artificial ventilation until the effects have worn off some 48-72 hours later.

This is the poisonous plant that was used to poison condemned prisoners in ancient Greece. Socrates was the most famous victim to be killed in this way.

Poison Hemlocks were used medicinally in ancient times as a sedative to treat symptoms of arthritis and for its anti-spasmodic properties. The problem was – there was a fine line between the exact amount needed to treat the ailment and the amount that was toxic enough to kill the patient!

Support local independant journalism by becoming a patron of the Frontenac News.

Advertisers on this site are local and deal directly with the Frontenac News. No scripts or trackers are used.